Chinese officials estimate about 250mn people or 18 per cent of the population were infected with Covid-19 in the first 20 days of December, as Beijing abruptly dismantled restrictions that had contained the disease for almost three years.

The estimates — which include 37mn people who were infected on Tuesday alone, or 2.6 per cent of the population — were revealed by Sun Yang, a deputy director of the Chinese Center for Disease Control and Prevention in a Wednesday health briefing, according to two people familiar with the matter.

Sun said the rate of Covid’s spread in the country was still rising and estimated that more than half of the population in Beijing and Sichuan were already infected, the people briefed on the meeting said.

The explosion in cases follows Beijing’s decision this month to abandon its former “zero-Covid” policy, which kept the virus at bay through mass testing, mandatory quarantine and draconian lockdowns.

Sun’s figures, which were provided in a closed-door meeting, contrast with data put out by the National Health Commission, which reported just 62,592 symptomatic Covid cases over the same period. Last week, China stopped publicly trying to tally the total number of infections after authorities curtailed Covid testing.

The lack of information made public by China on its Covid wave has led Washington and the World Health Organization to push Beijing to be more transparent on case counts, disease severity, hospital admission figures and other health statistics that have been made widely available by other countries.

In the Chinese capital and other cities, the wave of Covid infections has overwhelmed hospitals with an influx of elderly, bedridden patients and left emergency rooms and intensive care units with few available beds.

The NHC’s official account of the Wednesday event provided little detail on what the country’s top health officials discussed.

But in the meeting, Ma Xiaowei, director of the NHC, demanded hospitals sort out their overflowing emergency rooms and move patients into inpatient departments, according to one of the people who participated in the meeting. He also urged midsize and large hospitals to take in more patients with severe symptoms and promised that regulators would not hold them accountable for rising fatality rates. 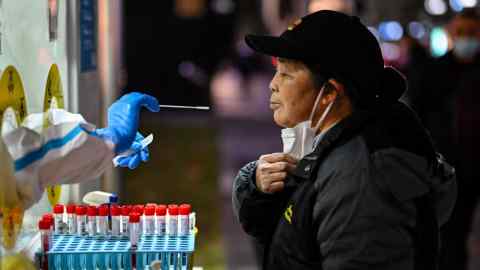 Meanwhile, the estimates of 250mn Covid cases raise further doubts about the accuracy of how Beijing accounts for deaths from the disease. The country has officially reported only eight deaths since December 1. Top health officials this week said they had narrowed the definition of what constituted a Covid death, in a move that reduced the public death tally.

However, crematoriums in the Chinese capital are struggling to handle a surge of corpses, and bodies were piling up at hospitals visited by the Financial Times in recent days.

Several models, including one part-funded by the Chinese CDC, have forecast that the country could have up to 1mn Covid deaths during its reopening.

The National Health Commission did not immediately respond to a request for comment.