You are here: Home / News / How Byron Buxton helped lure Carlos Correa back to the Twins

The shortstop had a secret he couldn’t wait to share with the Twins center fielder. A text message wouldn’t suffice.

The majority of the conversations between the two old friends this offseason focused on life, family and checking in on Correa’s well-being whenever his free-agent ordeal ground to a halt. Yet after mostly staying removed from the free-agent process, Buxton was looped in earlier this month after Correa’s agreement with the New York Mets began to falter.

Still, Buxton didn’t want to be blunt. Though he already knew Correa’s wife, Daniella, was far along in her pregnancy, Buxton innocently asked Correa if the couple was having another child. Correa quickly interrupted Buxton before he could make a second guess.

“(Correa) was like, ‘She’s already pregnant — I’m coming back to the Twins,’” Buxton said by phone Thursday night. “I was like, ‘What?’ I was in the yard, I was yelling and (Buxton’s wife Lindsey) was like, ‘What are you yelling at?’”

The celebration outside the Buxtons’ Georgia home on Monday night was one of many to occur throughout the organization this week.

Two days later, Correa finalized a six-year, $200 million contract with $70 million worth of vesting and team options that could keep him in a Twins uniform through 2032. The deal also means Buxton, who signed a seven-year contract extension with the Twins in December 2021, and Correa will play together for at least six more seasons.

Twenty minutes into our conversation, Buxton revealed a secret of his own: He contributed to bringing Correa back. 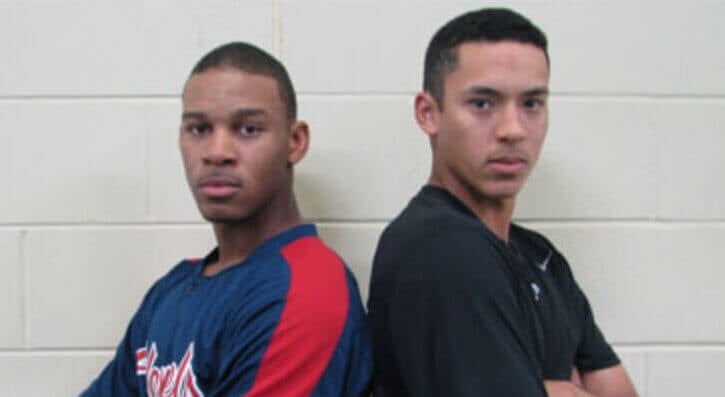 Carlos Correa texted Byron Buxton this photo of the pair from their draft days earlier this week. (via Perfect Game)

On Jan. 5, Buxton decided to re-engage. He’d previously been involved right before Correa agreed to a 13-year, $350 million contract with San Francisco, but had since stayed at arm’s length. Mostly their conversations were about making sure that Correa, whom Buxton had known since they were selected with the first two picks in the 2012 amateur draft, was OK.

But then it became obvious to Buxton the Twins might have a chance to sign Correa again. It had been 15 days since Correa agreed to a 12-year, $315 million deal with New York and the process had little momentum.

As they discussed the situation, Buxton not only determined Correa wouldn’t become a Met any time soon, but he also realized how much the two-time All-Star wanted to rejoin the Twins after spending the 2022 season with the organization.

Buxton immediately called Dustin Morse, the Twins’ vice president of communications and content, for more insight. He knew Morse, his fantasy football teammate, was close to the situation and could get him up to speed.

Morse informed Buxton how his call with Correa coincided with a text message from agent Scott Boras earlier in the day to Twins president of baseball operations Derek Falvey, one that gave an indication the talks may have some traction.

Up until that point, sources said Boras had primarily been focused on the Twins’ original offer of 10 years and $285 million. He wouldn’t give in. But last Thursday, Boras changed his stance and was open to a shorter term with a high annual average value.

Authorized by the front office to provide Buxton with that info, Morse spilled the beans.

“I think Byron really wanted Carlos back,” Falvey said. “He wanted to make sure if he was talking to (Correa) about it and was trying to get him to come back that we were actually going to make an offer.

“It’s never specific, specific info, it’s more like we want to keep the momentum of a conversation going. It probably happens in more negotiations than you realize.”

Similar to how most, if not all, teams operate, the Twins haven’t been afraid to rely on close friends of their free-agent players to stay in touch during the process. Morse’s friendship with Nelson Cruz proved critical to the team’s effort to re-sign the slugger before the 2021 season.

Though Boras, Falvey and general manager Thad Levine are negotiating and doing the heavy lifting, any current information a friend can provide might be useful.

Though they’d obviously grown closer in the season spent playing with each other, Buxton and Correa go way back. In addition to their draft connection, Correa and Buxton each spent the 2013 season playing in the Midwest League, Correa at High-A Quad Cities and Buxton at Cedar Rapids.

Whenever they played, their competitive spirits took over and created a “fun” foundation. The two liked pushing each other to perform during head-to-head games. Their friendship grew further that summer when each was named a Midwest League All-Star, spending the event together as throwing partners.

Buxton also recalled a conversation the two later had at second base once they arrived in the majors, when Correa asked about the center fielder’s experience in Minnesota and Buxton provided a strong scouting report.

The two quickly bonded last spring after Correa signed his three-year, $105.3 million contract in late March. Correa went out of his way to let Buxton know he didn’t want to step on any toes. Buxton was impressed with how Correa wasn’t fake and how by being himself, teammates gravitated to the shortstop.

Despite a close friendship, Buxton avoided pressuring Correa, who on Wednesday described their relationship as “beautiful.” Buxton wanted Correa back, but didn’t think influencing Correa’s decision was fair.

Well, at least not at first.

“I don’t feel like (Correa) needed to be pushed,” Buxton said. “‘You do what you feel is right for you and your family.’ It was just be there to encourage him in whatever he does. Once he went back into limbo, that’s when I kind of got a little bit more in the loop. I was like, ‘All right, what’s going on?’ They gave me a little insight. I was like, ‘All right, get off the phone, I’m about to call (Correa).’

“I immediately called him. We talked a little bit and he was like, ‘Don’t say nothing, but it’s a possibility we’re going to be brothers again on the same team.’ I was like, ‘We already brothers, but the same team is what I’m referring to.’ He was like, ‘But don’t tell nobody.’ I hung up the phone and called Dustin and said, ‘Stop sugar coating and give it to me straight.’ He was like, ‘It’s a good possibility.’”

Unofficially authorized by what one source described as a “rogue faction” of the front office to give Correa a push, Buxton reiterated what Falvey and Boras had discussed earlier: the Twins wanted Correa back, but it would have to be on a shorter deal with a higher AAV.

“I got off the phone and texted him,” Buxton said. “I was like, ‘Bro, I just want you to be happy. I know things are tough. If you need somebody to talk, just talk to me. I’m here,’ He texted back: ‘Love you brother.’”

Three or four days later, Buxton heard from Correa once again. Though they always suspected the other shoe might drop and Mets owner Steve Cohen would swoop in at the last minute to finalize their flailing deal, the Twins felt better about their chances knowing Correa was motivated to rejoin.

For whatever reason, Buxton always suspected Correa would return. He saw how Correa invested in the Twins, studying the farm system, trying to improve individual players and being aware of the team’s upcoming offseason moves.

When he saw Correa calling Monday, he had an idea it was good news. Yet it didn’t prevent Buxton from yelling loud enough with excitement for his wife to join him outside.

“He took time to study our team,” Buxton said. “He put his heart into the team. I saw that and feel like he had a connection. Two seconds later, (Correa’s) wife texted my wife and told her and she was like, ‘Now I see why you’re yelling.’ I don’t even know if I can describe it. It’s something you can’t make up.”